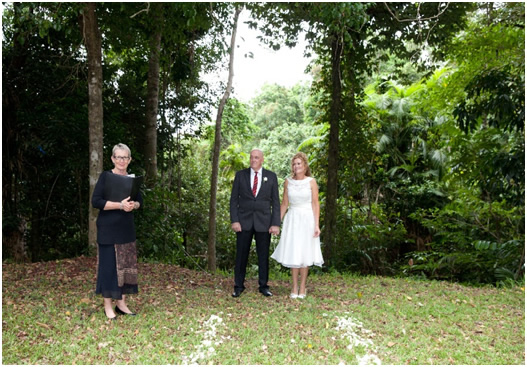 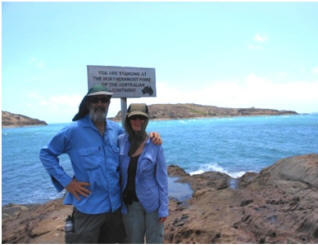 As I am so often asked about my background and my interests, here is a little of my past and in particular, the last 20 years and some photos that I hope you will enjoy.

My husband Warren and I have been married for many years, and in that time have backpacked a lot of Australia and earlier on, lived in New Zealand for 2 years up on the Tongariro Plateau and met some wonderful and interesting people over the years, and of course did all the great NZ walks. We now live in one of the best places in Australia - with great beaches on the edge of the Great Barrier Reef, rainforested mountains and creeks, and even the Great Australian Outback only 2 hours drive inland. Cairns and Port Douglas are joined by one of the most picturesque winding coastal roads you could find anywhere in the world, so another plus for living here in North Queensland.

But, how full have the past years been in relation to my work as a Marriage Celebrant!
In 1994 I was working as a Medical Secretary full time when I was appointed. This appointment was a great thrill, but I certainly never envisaged just how my life would change since then. For 7 years I continued to juggle my "full time" work with being a "part time" Celebrant. The celebrancy part of my work was gradually taking over, and I so wanted to spend more time creating ceremonies that related to my couple's lives.

Then in 2001, after having just acquired a computer, and contemplating a website, my husband and I had the adventure of a lifetime. We spent 1 month walking across the Simpson Desert with 16 wonderful courageous camels and 10 other beings. We had no backup vehicles just a Royal Flying Doctor radio for emergencies and each other to rely on. Our camels carried all the gear and water for 28 days except for a waterhole about 22 days into our trek. No riding – 810 dunes. This experience showed me that my life should be simpler if I wanted to devote my energies to helping couples create the wedding that was absolutely relevant to them. So on my return, I became a "full time" Celebrant and have not looked back.
This has been a very busy past 17 years since I decided to become a full-time celebrant, (24 years in total) but so fulfilling. Our trekking has taken a backseat at times, but still we have managed to follow in the steps of the explorer Edmund Kennedy and Jacky Jacky with donkeys (instead of camels this time) as our companions, explored and walked remote areas of Cape York, walked the Larapinta Trail in Central Australia (those blue, blue skies and that brilliant red sand of the dunes!), as well as the Cradle Mtn Track in Tasmania, Flinders Is., and Lord Howe Island.

In 2011 and 2013 we visited our daughter on the island of Sumbawa, Indonesia, and also Malayasia and Singapore.

2012 saw us up on Cape York – an area we had done a lot of bushwalking through over the years, but this time by 4x4. My husband had done quite a few trips as a volunteer on scientific research expeditions in the past few years, so had been to many off- track areas.
In August 2014, we again were drawn to the Australian desert again. This time to the SE corner of the Northern Territory side of the Simpson desert. We were so fortunate to be able to join a Scientific Survey and were searching for Aboriginal Mikiri (Native Wells) and Wiltjas (Shelters). The Aboriginal tribe - Wankangaroo people, walked out of this area in the late 1890’s, sadly never to return and the tribe eventually died out due to the destruction of the Mikiri upon which they relied upon for their survival. It was an amazing experience and one that we were so privileged to be a part of. And the most wonderful part was being reunited with 4 of the camels we traversed the Simpson Desert with in 2001 – Morgan, Char, Nugget and TC. Morgan and TC were also ‘stars’ of the film TRACKS.
Local history is also a keen interest and I research and write as well, and this too has introduced me to some fascinating people and their stories.
We are parents of two, parents-in-law, and grandparents to four great grandchildren..

So do hope you enjoy my personal photos and especially I hope that you too, will have many adventures in your own lives. 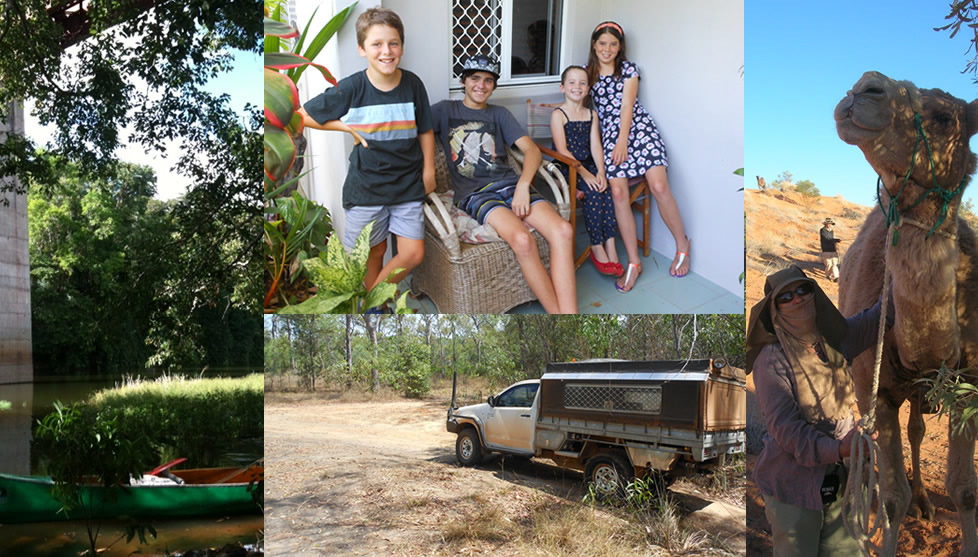